History of the San Michele Cemetery

The history of the Venice Civic Cemetery 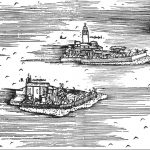 A detail of Jacopo de’ Barbari’s map, from 1500, showing the ilslands of San Cristoforo, front, and San Michele.

The story of the Venice Civic Cemetery on the Island of San Michele begins in 1806 with a letter from the general director of the police, the Frenchman Legarde, to Mayor Daniele Renier, with the order from Napoleon to build a new cemetery outside the city of Venice.

This was given effect by a decree issued on 7 December 1807.

In 1808 Giannantonio Selva, the official municipal architect, was given the job of constructing the new cemetery on the island of San Cristoforo, which at that time was a separate island between San Michele and the main islands of the city of Venice. San Cristoforo already contained a monastery occupied by Augustinian Hermits, and the monastery church of San Cristoforo della Pace facing the Fondamenta Nuove was a well-known part of the cityscape, seen in paintings by Canaletto and others. The church was designed by Pietro Lombardo in 1454.

When the island was turned into a cemetery, the church and the monastery were demolished. The ground was lifted 1.90 meters above the normal aqua alta level. The Mayor, Count Bartolomeo Gradenigo, inaugurated the cemetery in May 1813. The first funeral took place on 22 June 1813. 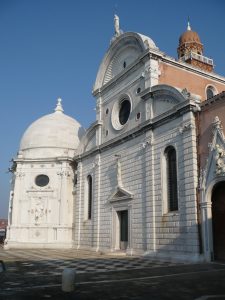 By 1833, the cemetery of San Cristoforo needed an enlargement, and it was decided to extend it by joining the island to the adjacent San Michele in Isola, between San Cristoforo and Murano. As a first stage in the merger, the two islands were joined by a bridge designed by Giuseppe Salvadori, Giannantonio Selva’s pupil, who also planned new walls punctuated by octagonal sepulchres. Between 1837 and 1839, the canal between the two islands was filled in and on 12 August 1839 the Cardinal Patriarch Jacopo Monico gave his blessing to the united Cemetery of San Michele.

The work on the cemetery was by no means finished, however. In 1870, it was redesigned by the engineer Annibale Forcellini, and construction of the present cemetery began in 1872, though Forcellini did not complete the work, due to financial problems in the municipality. The island was walled and given waterside chapels mixing neo-gothic and neo-classical features. Separate sections were set aside for the Evangelici (non-Catholic Christians) and Greci ortodossi (Greek Orthodox). (The Jews and the Armenians have separate cemeteries on other islands.) The civic cemetery project was completed in 1881.

The Bernardo and Gaetano Combatti map of 1846 is the first map showing San Cristoforo and San Michele with the single name Isola di San Michele.

In 1998 a competition for an extension to the cemetery was won by the British architect David Chipperfield. This extension has been built close to the reparto evangelico, on the southern side, just outside what was once the water gate of the reparto.