History of the Protestant Cemetery 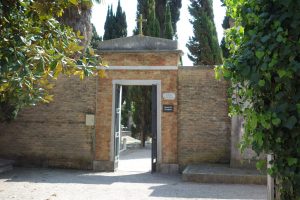 The Protestant Cemetery at San Michele

The Protestant section of the Civic Cemetery on the Island of San Michele, or the “Reparto Evangelico” as it is known in Italian, is owned by Venice City Council. It is a listed property and has been used for Protestant burials since 1895.

The Protestant presence in Venice goes back centuries. The first written evidence of a Protestant community dates from 1650, when a pastor and a meeting hall was recorded.

In 1684 a Protestant Cemetery at the Lido Cemetery was founded.

Initially, the parish of San Bartolomeo, which included the Fondaco dei  Tedeschi (the trading post for German merchants), was responsible for Protestant burials, but in 1719 the German community asked for a cemetery of its own to be created on one of the islands in the Lagoon.

A plot of land was granted for this use on the Island of San Cristoforo. This was enlarged several times and in use until 1807, when Napoleon ordered the closure of all churchyard cemeteries in Venice and the creation of a central burial ground on San Cristoforo.

The Protestant Cemetery was moved to make way for work on the new civic burial ground and within a couple of decades the decision was taken to expand the area to include the adjacent Island of San Michele. The work finished in 1839, but in 1895, further new work caused the Reparto Evangelico to be moved to its present position (Area XV).

The Protestant Cemetery occupies an almost square area (50 x 56 metres) to the east of the Monastery. It is surrounded on all four sides by a brick wall, with access via an iron gate linking it with the Catholic Cemetery. Another entrance in the opposite wall was formerly the main gate and gatehouse that gave access directly from the Lagoon.

The layout of the cemetery is cruciform, on a N-W/S-E axis.The gate leads straight onto the gravel path forming one arm of the cross. The centre point of the cross covers an underground ossuary. The tips of the arms of the cross are linked by a path following the line of graves at the foot of the encircling walls.

Most of the graves are marked by tombstones in the four internal sectors, while the outers lie against the four brick walls. Some of the tombstones are crafted monuments, topped with sculptures and ornaments.

There are many tall trees, including cypresses and bays, scattered amongst the graves and they help to give the cemetery a memorably evocative atmosphere. The reparto contains just one funerary chapel, its three arches set into the southern wall, enclosing the remains of a family of Italian Protestants.